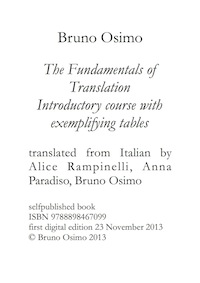 When speaking about translation, people usually think of the trasposition of a text from a language (a natural code) to another, different from the one in which the text was originally conceived and written. As a matter of fact, that is just a peculiar subprocess within the boundless universe of translation. One of the first steps towards a more scientific and complete approach to translation as it is generally thought of consists in acknowledging all its potential aspects.
The translation process is often described with metaphors relating to space and movement. In some languages the terms referring to “source text” and “target text” are undoubtedly linked to the notion of “space”. In Italian, for instance, “testo di partenza” and “testo d’arrivo” (literally, “starting text” and “arrival text”) refer to the semantic field of runs and races. The same is true, for example, for the French “texte de départ” and “texte d’arrivée”.
To some extent, it seems that translation were a sort of transportation of something (apparently words) from one place to another. And this might be due to the fact that even the Latin word from which “translation” derives, “translatus”, comes from the verb trans-fero meaning “to bring on the opposite side of”. But even though it is true that translation has a spatial dimension, it also has a temporal and cultural one, all three made up of a number of other interrelated elements.
To avoid all the words which are too explicitly linked to the semantic field of departures and arrivals, which remind of military targets (“target text”) or which imply the misleading idea that there were no previous influences on the first text (“source text”), one may call “original” the text from which the translation process stems, and “translation” the text resulting from it. However, the word “translation” does not allow to make a distinction between the process and the outcome.
That is why the ideal terms would be “prototext” (i.e. “first text”, the original text) and “metatext” (i.e. the subsequent text, deriving from the first one). Such terms were coined by the Slovak semiotician Anton Popovič (1933-1984), who gave a substantial boost to translation studies in the 1960s and 1970s. Unfortunately, his ideas spread to the Western countries only after he had prematurely died.
It is also necessary to define the notion of “text”. The first definition that comes to mind when speaking of a text is a consistent group of written words with a unified structure that makes it a whole. But according to semiotics, the notion of “text” needs to be extended to nonverbal languages, such as music, figurative arts, cinema, advertisement, natural environment, street signals, and so on.